Marketing the Arts: Reflections after a suburban outdoor festival 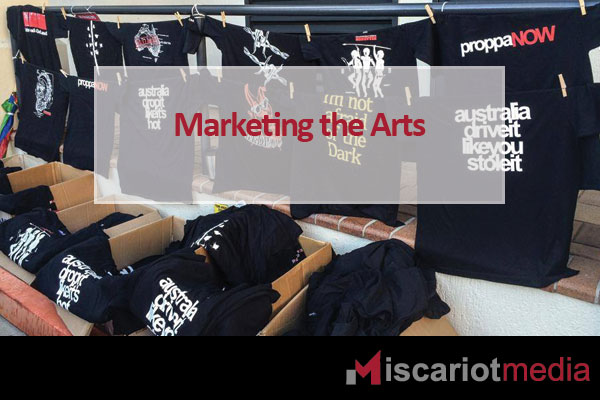 It’s the morning after arriving home from 12 hours straight (at least 11 of those hours were on my feet) at Teneriffe Festival. Selling proppaNOW tshirts and books, we barely made $100 (taking into consideration cost of goods sold and festival expenses). But, being me, I refuse to use this as anything but a learning experience. I realised while watching thousands of well-ish heeled inner-city-suburban types walk past, that we have a big job to do. There is a point to this story, so please bare with me. I need to do a quick back-track to last October.

The opportunity to “do” Boomerang Festival came up around August 2013. The Boomerang organisers wanted to talk about having a proppaNOW exhibition/gallery space at the Festival. proppanNOW rejected a gallery at an outdoor venue, but Iscariot Media proposed an alternative on their behalf, a tshirt project – each artist would create an original design to place on a tshirt. We (IM) would get them printed and manage the project. Boomerang were happy with the idea, so we went ahead. On the first day of the festival, I very quickly on-the-fly created a script of sorts. In what eventually became a ten – fifteen minute presentation to visitors, I could succinctly describe each of the artists, their shirt design, how the designs related to the broader bodies of work of each artist, and discussed the range of institutions that had also hosted a proppaNOW exhibition over the years. In my scripted I also mentioned repeatedly the Museum of Australian Democracy (95% of the people I spoke to had never heard of it) which at the time was about to hold the Insurgence exhibition. I also talked (for two and a half days) about AGNSW, NGA, NGV, GAQOMA, IMA, PICA, Tandanya, and many others. Many of the visitors to the proppaNOW tent had never heard of these institutions, as well as not knowing anything about the work of proppaNOW. In many cases I was able to find out where visitors were from and would talk about an institution they lived near. Many people attending Boomerang were local, so I would talk about local regional galleries, or the last time they had visited Brisbane. I frequently talked also about non-proppaNOW artists, like Fiona Foley, Judy Watson, Gordon Bennet, as well as Indigenous literature. Needless to say, I had no voice left at the end of that weekend.

I remember thinking at the time, MoAD should pay for me for the amount of marketing I was doing for them. Yesterday at Teneriffe, and before that at Clancestry (in February), it was the same. I was talking up upcoming exhibitions of members, and different exhibitions of other artists at institutions. For me, the work we (IM) do with proppaNOW is a labour of love, and is not just about selling x number of t-shirts. We are committed to finding a human (face-to-face) way of reaching out to people who have never heard of pN and the work they do. It’s about reaching the “great unwashed”, those people who don’t go to art exhibitions, don’t know the language of art, or don’t see the importance of art in the world.

How do we reach those who seem to be still unreachable?

Selling a new artwork is relatively easy to people who are already engaged. If you’re already a buyer, a fan, a student, or just a lover of art, then you don’t need me to sell “art” to you. Like the sales saying goes, “it’s easier to sell a second product to an existing customer than to sell an initial product to a new customer.” The story of art is the first product, and the t-shirt (or artwork, theatre ticket, art book/magazine, etc) is the second product. I wouldn’t be the first to say it, but I really don’t think the country has bought art yet. As Iscariot Media, try as we might, we do not have the resources to sell art to the world. We can’t do it on our own.

Let’s create a PSA for Art
I looked with envy at Telstra’s pink caravan yesterday – all kitted out, flash marketing materials, awnings, paid staff. Our little plastic tables and shirts strung up rope was deadly, but it definitely couldn’t compare. I could measure the actual cost of proppaNOW having a presence at Teneriffe Festival – planning, insurance, transportation, staff on the day etc, but I know, even without adding the numbers that we would have spent at least ten times what we made. But what if sales of shirts wasn’t the point of the exercise?

If we could work together with institutions (who may be under-resourced, but have a million times more resources than a small creative enterprise like Iscariot Media), to develop a strategy and campaign designed to sell the broader story of art to Brisbane, what could be achieved? What if we decided that the arts IS that important? What if we spent a few days a year going to suburban festivals and markets around the region, talking about our work and the arts in general? What if we got out of the inner city – Southbank, West End, New Farm, Woollongabba  – and headed to the suburbs and talked to people about art? If we all worked together, what could be created and what impact could we make?

When the labour of love gets laborious, we have to get smarter
Standing there last night, watching the hoards file past, I, in no particular order got annoyed with myself (such as mis-calculated business decision, and sheer of lack marketing resources), institutions (if only we had a fraction of their resources we would be amazing!), and the system (why have we not thought of working together to sell Arts, face-to-face, with real every-day language style, in the peoples’ backyard?). I would like to continue to do this “outreach” work, it’s tiring but it’s very fulfilling. I love connecting with non-art people, learning about their stories, and then finding the connections to a possible art sale sometime in the future.  But I know that I can and must do it more effectively.

When people ask how our “markets” activities go I either say they’re failures, or successes. Financial failure maybe, but outreach successes. I believe that working on outreach now, will generate financial success in the long run. For everyone.

The work of the proppaNOW Collective and other artists is vitally important. Their work gets people thinking, encourages the kind of self reflection we need to make a better nation and a better future. We, as supporters of artists, need to get smarter about how we help to ignite imaginations.