If art is about asking questions, what is the role of design in telling our story? As designers it’s imperative that we continue to ask ourselves the hard questions. Over the course of 90 minutes Aboriginal artist Vernon Ah Kee will explore identity and appropriation in Indigenous design, as well as the the relationship between art and design.

The first in the Iscariot Media Provocation series, this event is suitable for Indigenous designers, design students, and creative agency professionals. 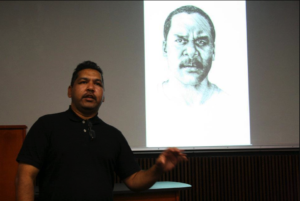 Born in Far North Queensland, Vernon Ah Kee is a conceptual artist and a founding member of the Brisbane-based proppaNOW artists’ collective. He has a Bachelor of Visual Arts (Hons) at the Queensland College of Art, Brisbane. Vernon’s work critiques Australian popular culture, particularly the dichotomy between Aboriginal and non-Aboriginal societies and cultures. His art practice consists of video, 3D installation, photography, digital design, painting, printmaking, and drawing.

Solo exhibitions include ill-like at the Kluge-Ruhe Gallery in Charlottesville, USA (2012); tall man at Gertrude Contemporary in Melbourne (2011), Vernon Ah Kee at City Gallery in Wellington, NZ (2010); Waru, Kick Arts Gallery, Cairns (2009); Blow Your House In at Mackenzie Gallery, Regina, Canada (2009); Belief Suspension at ArtSpace, Sydney (2008); and Cant Chant at the Institute of Modern Art, Brisbane (2007) where ‘borninthisskin’ (2009), the first major publication on his work was published.

Vernon was a finalist in the 2010 Basil Sellers Art Prize, and the 2012 Archibald Portrait Prize with his portrait of Lex Wotton.